Worth knowing over Bornholm

Layer:
Bornholm is breadth 54Â° 59 min. north of min. 55Â° 18 and 14Â° 4 of min. 15Â° 10 min. eastern length.
One finds a Granitsstein in front of the muzzle of the Øleflüsschens which precisely marks the blade point between 55Â° of northern breadth and 15Â° of eastern length with a cross a little eastern into the Baltic Sea to Bornholm's southern coast.
It is for breadth north of 55Â° 55 x 111 km = 6105 km to the Äkvator and 35 x 111 km = 3885 km to the North Pole.
One calculates the so-called Central European time of of 15Â° eastern length and is often called "Gudhjemzeit".
All places on 15Â° of eastern length have the sun exactly as the only authority in Denmark in the south point 12.00 clock, except for the summertime. Ertholmene are breadth min. north of 55Â° 19 and min. eastern of 15Â° 11 length.

Worth knowing over Bornholm
Names and sizes of the islands:
Bornholm is more smally than Sjælland, the nørrejyske island, Fyn and Lolland, Denmark's fifth largest island. It measures 588 Kvadratkilometer, incl. Ertholmenes 0.38 Kvadratkilometer.
22 hectares, Græsholm with 11 hectares and Frederiksø with 4 hectares with some smaller islands and reefs - deed, Lilleø, Vester, Tyve, Præste and Østerskær - easternmost of Denmark point pass Ertholmene from Christiansø.

Division and population of the islands:
Bornholm is an independent office - Bornholm's office. The largest towns of the island are: Bornholm has inhabitants Rønne, Hasle, Allinge-Gudhjem, Nexø and Aakirkeby approx. 44300 .
The Ertholme are state and are subject to the Ministry of Defence. The two inhabited islands - Christiansø and Frederiksø - have a complete total population of 120 inhabitants.

Bornholm's form and its longest distances:
Bornholm forms a crooked four-sided figure with the corners: The distance Hammeren-Dueodde is approx. 30 km and Rønne, Hammeren, Svaneke and Dueodde distance Rønne-Svaneke at approx. 40 km .

Something over Bornholm's towns:
The largest town of the island - Bornholm's "capital" - is Rønne with his approx. 15300 inhabitants.
Against this Svaneke Dänemarks is the smallest and easternmost town. Aakirkeby is the only ones of Bornholm's towns which lies inside the island, Aakirkeby Bornholms was in the past a church and business centre.

The highest elevation:
With Kongemindet of 1856 and the iron rack being part of it of 1899 the Møllebakken all of the 184 m above sea level on Christiansø is - Rytterknægten in the Almindingen with 162 m over the sea-level the highest point is up with its Ertholmens 22 m above sea level.

Biggest woods:
Denmark's third-largest woods with approx. 25 Almindingen altogether have Kvadratkilometernr. Bornholm approx. 21% woods and are Denmark's most densely wooded office with that.

The biggest lake:
Hammersøen it is 600 m long and an area of 9 hectares covers.

The biggest waterfall:
The northwest in front of the Helligdomsklippen lies Döndalen Døndalen. The rivulet in its valley forms in the spring and late summer if most water carries a collected waterfall it which can fall down up to 25 m, Døndalsfaldet.

The longest column valley:
Ekkodalen an average breadth of approx. 60 m and a complete length of approx. 12 km continues in straight line by Flæske, Kløve-og Kelseåtal to to Saltune at Bornholm's north East coast and has. Altogether, Bornholm has approx. 70 column valleys.

The biggest shaking stone:
It Rokkestenen into the Paradisbakkerne (paradise hills) measures 4x3x2 m and has an adopted weight of 30-35 tons, ..

Connections between Bornholm and Ertholmen:
A ferry link with "M/S Ertholm" of Allinge, Gudhjem and Svaneke of Svaneke with mail boat "Peter".
In acute situations one can use a helicopter which can land on Møllebakken Christiansø.

Airfield:
In front of Arnager Rønne Lufthavn or Bornholms Lufthavn lies - international the northwest they are called "Arnager airport".

The biggest fishing port:
The port in Nexö.

Bornholm's round churches:
Nykirke sets up (the small one - only in two stories - presumable the young ones and these of only few for the defence suitable),
Nylars (the best excellent - built best, and in addition got best),
Olskirke (the slim one and mostly fortress like, because it lies on the top of a 112 m high hill among other things.)
Østerlars (the great one, the old, fortress like and known).
A little over some churches in Bornholm:
In Aakirkeby "Bornholm's cathedral church" has a very famous font Aakirche. Manufactured into sandstone of the gotländischen stonemason Sigraf in last half of the 11th century.
Rutskirche in Rutsker is probably Denmark's to church meaning much the highest approx. 130 m above sea level
Bornholms Kleinste. is Knudskirche in Knudsker,
Tejnkirche of 1940 is the youngest one.
Povlskirche this one is only tower lots in Povlsker and the only ones is the church in Allinge yolk painted.
One finds some of the old wood portals in many of the Bornholmer churches in the churchyard embankment certainly today. The Nykirke in Nyker has even three wood portals in the churchyard embankment; also Bornholm is of what the oldest old of 1678.

Hammershus:
The Hammershus ruin lies on a 74 m high rock massif on north well bar.
The biggest ruin complex north of the Alps to Visby in Gotland. The fortress was built by archbishop Jakob Erlandsen presumably. At the beginning of second half of the 12th century. 1743 the Hammershus was assigned by the state and a demolition started. Denmark has stopped the best most received Middle Ages bridge. These are still the plum tower and the south tower the castle bridge - at the best kept remaining building of the fortress ruin.

The oldest royal castle:
The ruins of the Lilleborg - the north's oldest royal castle - lie on a 16 m high rockbed over the Borre-Eller lending lake in the Almindingen. Set up approximately in last half of the 11th century. It was this ground levelled out in spring 1259. Finds in this place indicate that glass was used in the windows. Therefore the first time in Denmark.

A little over Bornholm's windmills:
About Gudhjem Denmark's biggest windmill rises, this embellishes emblems of the town in the nightly light of headlamps ..
Two windmills high lie about Svaneke. The oldest of them, "Stubmöllen" of 1634 is Denmark oldest.
The only old windmill which still is in the use since its making is the big Dutch windmill of 1877 - emblems of the small town Årsdale.

The first state prison:
1825 became a state prison Denmark builtly - first on Frederiksø. It was used to 1856 as a prison.
The largest collection of rock drawings:
"Madsebakke" at the Küstweg between Allinge and Sandvig.

The highest one making feeling one:
Frennemarkstenen, it stands to the south in front of Svaneke, is almost 3 m high and stands together with two others making feeling.

The highest rune-stone:
"Brogårdsstenen", it is at the fork of a road Rønne, Hasle and Klemensker. The stone is more than 3 m high. Altogether, there are approx. 40 rune-stones in Bornholm.

The longest fieldworks:
Bornholm has approx. 100 embankments at its coasts all around. It is assumed that the "Langeskanse" longest of them - like most of the other embankments - dates from the nordic seven-year war (1563-70). 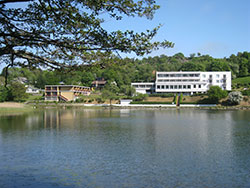 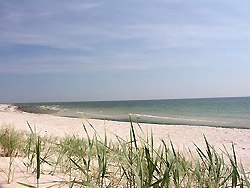 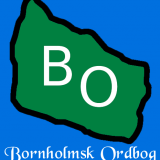