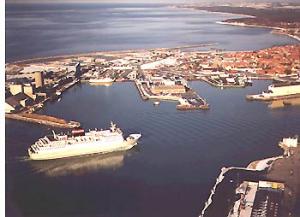 1327 became the merchant city of Rønne founded.
Rønne is capital of Bornholm today and has the biggest port of the island with connections to all east sea riparian states.

Thanks to the vision in the town planning many still stamp received half-timbered houses well. The old urban features remained unchanged around the Nikolaikirche which is from the 13 .I 14th century and was replaced largely between 1915 and 1918 got. The Hovedvagten dates in the sending erg goodbye from baroque time; some half-timbering courts all round still stand from same time. At the beginning of the last century the half-timber building was it inside unchanged permits > Erichsens Gård < set up the a view as a museum in the elevated life of the chambers advice Thomas Erichsen today in the middle of the 19th century.

Tradition has arts and crafts on Bornholm, particularly Keramik.Samstags and a coloured livens up on Wednesdays. "Net curtain Tov" is ready weekly market for sport boats the centre two ports ready of Rønne, this one: A little basin in the Søndre Havn and the to the north situated yacht port Nørrekås. Port repeatedly starts at the inhabitant of Rønne ', five different bus tours over the whole island on the day sand stripes can be reached all island sights by interruptions and combinations also without a car of their own in and around Rønne as well as to the north it is existing for bathing facilities but none very much spread so.